What does Bird Spider Mean?

Facts about the bird spider

The largest and most powerful of all bird spiders are the furry bird spiders. The size within the group “bird spiders” varies a lot. Body length varies from 1-13 centimeters. Just as all other spiders have two-part bodies, so does the bird spider. Its head and forehead merge into one, and here we find the animal’s 8 legs. In addition to the legs, there are 2 long and hairy sensory organs, which are called palps. These are found in front of the legs. Bird spiders have 8 eyes that sit on top of their heads. At the front of the head, there are powerful poison hooks that it uses to catch its prey. The poison hooks sit parallel next to each other and move up and down, which is opposite to all other spiders, where the poison hooks point towards each other.

The largest bird spider in the world is the species Theraphosa blondi, which lives in South America, Sri Lanka and India. It has a body length of up to 12-13 centimeters, a leg span of 27-28 centimeters. In addition, it weighs up to 125 grams. Due to its size, it is also highly feared.

Bird spiders are predators. It primarily eats insects, but can also eat frogs, lizards, mice, bats and small birds. However, it is mostly the very large bird spiders that eat larger animals. Bird spiders do not make webs to catch their prey. Some bird spiders wander around looking for prey, but the vast majority sit in their cave waiting for their prey to pass. The way the bird spider catches its prey is by chopping and paralyzing the prey with its poison hooks. After paralyzing the prey, it injects a liquid into the prey. The liquid causes the prey to dissolve into a kind of insect smoothie, so that the animal is easier to eat. The venom itself from the furry bird spiders is so strong that it can paralyze most prey. However, the poison is not dangerous to humans, and in many ways can be compared to getting a wasp sting.

Among the females, it has been seen many times that cannibalism occurs between the bird spiders. Here the females eat the males for nourishment. The bird spider sees everything that moves as possible prey. The males are very small compared to the female, so the female sees no reason not to eat him.

When mating, the male goes for a walk to find a female he can mate with. Once he has found a female, he knocks on her wall using some knock signals so the female does not think he is a prey. If the female is interested in mating, she comes out of the cave opening. The mating takes only a few minutes. The male holds on to the female’s venomous hooks, fearing the female will eat him after mating. It happens many times that the female eats the male when the session is over. When mating is complete, she lays up to 1,000 eggs in a web, after which she rolls the web together with the eggs into a ball, which she then carries under her stomach. After a short time, the eggs hatch and the small spider pups live in the female’s cave until they have changed skin for the first time. Then they leave the cave, and build their own little caves. After changing skin many times, are the adults and sexually mature. Which typically happens when they are 1 to 3 years old.

Bird spiders are by no means a herd animal. They live, so to speak, all their lives alone. The sexes are only seen with the opposite sex when mating. It is only when the female has cubs that she does not live alone, while the male largely lives his whole life alone. Bird spiders usually live “just” in their caves, and only come up when they need to catch a prey. Bird spiders have enemies, which are many different mammals, such as rhinos. Bird spiders usually defend themselves by hiding in its cave, but many of them also actively defend themselves.

Travelers’ questions about the bird spider

Why is it called the “bird spider”?

Many explorers have enjoyed exaggerating their tales of exotic animals. The bird spider is no exception. In 1705, a female explorer drew a picture of this huge spider eating a hummingbird.

Another explorer also reports that he saw a giant spider catching birds in its net. The explorer of course saved the two birds from the dangerous bird spider – from here it got the name bird spider – a name that has stuck, but which actually a little mistakenly characterizes the spider as something it is not.

Where is the bird spider?

The bird spider is found all over the world.

Is the bird spider in Denmark?

Yes – there are bird spiders in Denmark.

Most people think that one only finds bird spiders under warmer skies, but the truth is actually another. The truth is that you can easily find a bird spider in the Danish nature and actually meet one on your hiking trip in the forest. The bird spider has been seen in more than 20 places around the Danish forests. Eg. in forests on Bornholm, near Djursland, Røsnæs and Silkeborg.

However, it must be said that the type of species found in Denmark is not dangerous. It is much smaller than the furry bird spiders. It does not get much larger than 10-15 mm, but can be compared to the bird spider because it, like others, sprays poison that paralyzes and dissolves the prey. Bird spiders can grow up to 25 years old, which is very abnormal for spiders. They usually stay 1-2 years. The Danish bird spider can also be approx. 25 years, unless it dies before of diseases. Due to its size, the Danish bird spider is more afraid of humans, that it will actually harm humans. Bird spiders feed on insects and therefore do not see humans as a potential prey.

Is the bird spider dangerous?

No – it’s not dangerous

Many people around the world believe that you will die if you are bitten by such a spider. But the truth is, a bite from a furry bird spider is not particularly bad. The bidet is not worse than a measly bee sting, which it most resembles. Of the 880 different species of bird spiders found worldwide, only 5-10 species actually pose a threat to humans by biting. There is therefore nothing to fear if one were to be so unlucky as to be bitten by a bird spider. 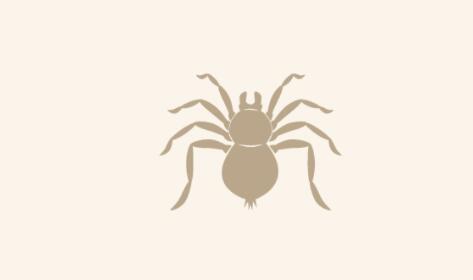